Then the King Will Say...

“Since Jesus knew what was going on, he said to them, ‘Why are you bothering this woman? She has done a beautiful thing for me’” (Matt. 26:10, GWT).

As I read this passage a few days ago, Holy Spirit was bringing me into the story. I could feel Jesus’ inner being full of emotion as He received this woman’s ministry. He was only days away from His death. His awareness of its rapid approach is evident in the numerous remarks that kept flowing from His heart about the subject. Just eight verses earlier in the text, He had again announced to His disciples: “You know that after two days is the Passover, and the Son of Man will be delivered up to be crucified” (v. 2, NKJV).

Jesus was human. Humans have emotions. His soul could already perceive the weight of what He was about to endure. The bitterly cruel taste of the cup He was “about to drink” (Matt. 20:22) was already present on his tongue. His razor-sharp prophetic awareness allowed Him to keenly feel the nearness of His pending torturous death. 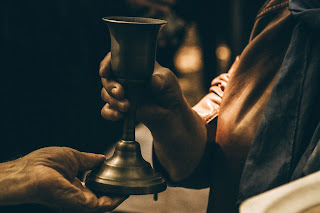 Under these conditions, He watches this earnest, beautiful sister come in. She is clutching in her hands her most valuable physical possession, an alabaster jar full of costly perfume. Easily worth a year’s wages, this vessel in many ways represents all her life’s dreams and longings. Having resolved to give Him the very most precious gift she could procure, she has already broken the seal. Her eyes fixed on His face, love spills from her countenance as she gently approaches Him. She is holding nothing back. She is steadfastly determined to pour out on Him the most generous expression of her love, that which will cost her everything.

He sees the passionate adoration burning in her eyes. The aroma of the perfume matches the beauty of her fragrant love; both fill and saturate the atmosphere, surrounding Him with the revelation of His belovedness. Her love, reaching out, is making intimate contact with His soul. She is meeting Him in the midst of the pain He is already beginning to bear. This palpable demonstration of her unbridled devotion is alleviating the heaviness of the weight pressing on His emotions. Her worship enters into the core of Him and brings Him intensely profound comfort. She is ministering to the very depths of Him.

Overwhelmed by her expression, He cannot hold back His gratitude. He exclaims, “In pouring this ointment on my body, she has done it to prepare me for burial!” (v. 12, ESV). She has not only prepared His body; she has also helped prepare His soul. Her love has imparted tangible relief and strength to Him. He continues, “Truly, I say to you, wherever this gospel is proclaimed in the whole world, what she has done will also be told in memory of her!” (v. 13). So important, so essential, so vital is her role in this week leading up to His death, that the stunning beauty of what she did for Him must be announced all over the entire world!

Just two subheadings earlier in the book of Matthew, we find a flabbergasting revelation. You and I can likewise minister powerfully to Jesus, reaching His heart with the same degree of overwhelming intimacy, as this woman did.

“I was hungry and you fed me; I was thirsty and you gave me water; I was a stranger and you invited me into your homes; naked and you clothed me; sick and in prison, and you visited me… When you did it to these my brothers you were doing it to me!” (Matt. 25:35-36, 40, TLB).

Can you imagine the King of Kings on the throne as John the Revelator saw Him? “His eyes like a flame of fire… He had in His right hand seven stars, out of His mouth went a sharp two-edged sword, and His countenance was like the sun shining in its strength” (Rev. 1:14b, 16, NKJV). Jesus, revealed in the fullness of His infinite might, shining like the sun in all of its brilliance, looking at you in the eyes and expressing… vulnerability? “I was hungry, thirsty, naked. I was sick and alone, languishing in prison. I desperately needed someone to come.”

How is this possible?

In this expression of His heart we find the answer: “For thus says the high and lofty One who inhabits eternity, whose name is Holy: ‘I dwell in the high and holy place, and also with him who is of a contrite and humble spirit, to revive the spirit of the humble, and to revive the heart of the contrite’” (Isa. 57:15, RSV, bold emphasis mine).

Jesus both inhabits the high and lofty position of His unspeakably magnificent throne… and dwells amidst the squalor of the most forsaken squatter populations of the earth. Both. He is magnified and lifted up, exalted with the Name that is above every other name… and He is in prison. He fills all of eternity with His measureless, omnipotent glory… and He is here with us, struggling in our pain.

There is affliction all around us. Our existence intersects with the lives of broken people, hurting from the consequences of the fall of man. No doubt, you yourself reading this post, have your own share of heartache that you have either walked through in the past or are currently enduring.

Jesus is in all of it. When His physical body ascended into heaven, His Spirit came to inhabit earth. The Holy Spirit is both His own distinct Person, and He is Jesus. He is the Spirit of Jesus. Jesus really meant it when He said He would be with us always, even to the end of the age. To be with us, He has to be here. He is here.

Jesus is fully, intimately present with us. His emotions are wrapped up in our human experience. As a result, He is hungry. He is thirsty. He is wandering around impoverished barrios in soiled rags. There are open sores on His skin and His stomach is bloated. Flies buzz unceasingly around His unhealed rash. He is sleeping on cardboard on the sidewalk, huddled in a foul-smelling blanket. He is incarcerated, longing for someone to care. 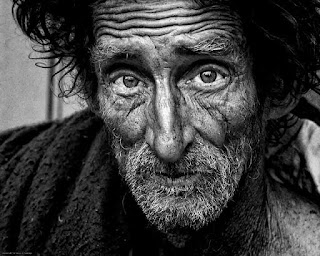 The woman with the alabaster jar touched Jesus’ very core with her love. So can you. For you see, wherever someone is suffering, He is there. When you look into their eyes, if you pay close attention, you will see Him looking back at you. He is right there next to you in line at the grocery store. He is standing behind that cash register. He is bringing you your food at the restaurant. He is walking down the sidewalk in front of your house. He is living next door.

He doesn’t expect you to save the world. But He is asking if you will reach out and relieve His pain? When you show that one kindness, you are alleviating His aching. When you bless that one with a warm touch and a genuine smile, tangible comfort reaches into His very soul. When you sacrifice your comfort and give of what is most precious to you, in order to enter into the world of “the least of these,” He is inexpressibly grateful. These are His “brothers.” These are the precious ones that He loves more than His life.

We began this conversation describing the worshiping woman with a jar of expensive perfume in Matthew 26. Her identity remains undisclosed. In spite of Jesus’ determination to make her breathtaking act of love known throughout the entire world, He does not tell us her name. I believe this is because He is inviting us to be her. To fill in our own name in the blank. Today, He is beckoning to you. He is earnestly asking you to personally minister to the very depths of His heart.

How will you respond?

Posted by Jenn Arimborgo at 2:58 PM