Spiritual Weapons of Mass Destruction that Devastate the Devil: Between Starting Gun and Finish Line, Part 2

The list continues… What do you DO with yourself on the prolonged wait for the birth of Baby Promise? Especially when the wait becomes excruciating? In this post we will continue to study out the answers to these questions.

Sometimes we can’t see or feel God. Sometimes His word to us seems so far away as to be irrelevant to our present crushing circumstance. Sometimes all we can perceive is the severe enemy opposition that is inundating our senses. Have you ever felt utterly overwhelmed on your wait? Can you identify with the following description of desperation?

“Death bound me with chains, and the floods of ungodliness mounted a massive attack against me. Trapped and helpless, I struggled against the ropes that drew me on to death.”

These words proceeded from the heart of King David, one of the Bible’s foremost Active Waiters. In Psalm 18, he recounts his experience of feeling entirely powerless against a devastating onslaught threatening to snuff out his life (vv. 4 -5, TLB). Many of us feel like we are reading a depiction of our own pain in his account. What astounds me about this chapter, though, is the extraordinary contrast between David’s “before” and his “after” in this narrative. Let’s take a closer look.

Here he is after he has come through unscathed: “I pursued my enemies and overtook them; I did not turn back till they were destroyed” (v. 37, NIV). “I beat my enemies into pieces, like dust in the wind. I poured them out like mud in the streets” (v. 42, NCV)

This is the same chapter – just a handful of verses later! How in the world did David go from being absolutely overpowered by his enemies, to absolutely victorious over them?

This brings me to the following point on our Active Waiting list. (This post is a continuation of the previous one, which you can find here.) Psalm 18 reveals to us the next key in our study:

2) Show Up for Battle


You have to be willing to get dirty, get spiritually violent, and get in the fight. Part of actively waiting on God is putting up your fists and jumping headfirst into the fray. The enemy would love nothing more than to steal Baby Promise from your spirit. You can’t take his belligerence lying down. “The violent take it by force!” (Mat. 11:12). You must wage war both for and with the word God has given you. The wonderful news is, when you are willing to fight, you will always win. In God’s army, the only soldier who loses the battle is the one who capitulates.

This verse in the middle of Psalm 18 captures for us what happened between David’s before, cowering before his menacing enemies, and his after, grinding those same foes to little pieces: “He teaches my hands to make war, so that my arms can bend a bow of bronze” (v. 34, NKJV). Somewhere in the interim between being rescued from petrifying aggressors, and trampling them into the dust, a conqueror had been born. 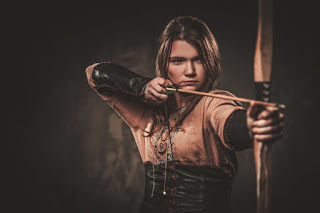 If you will consistently show up for battle, God will gradually transform you into a bloodcurdling warrior. If you will enlist in His militia, He will train you. No matter how weak you are before your training, your after will have you looking like a holy terror to the devil. It all unfolds on the battlefield. It all comes down to a willingness to war.

Countless books have been written on spiritual warfare, and I don’t have space here to dive into all the specifics of battle tactics and strategies. I only want to make the point that an essential component of active waiting is a commitment to engage in combat.

On my family’s recent trip to the United States, we stayed in quite a number of hotels around the country. I have learned over the years to pray over each new room upon arrival, cleaning it out spiritually from oppression left over from previous guests. However, on many an evening, arriving late at our stopping place for the night after driving for ten to twelve hours, I was exhausted. On one of those occasions, I collapsed into bed. I was aware that I hadn’t done the cleaning job and that doubtless there were enemies lingering in the atmosphere. However, I did not feel up to the confrontation needed to kick them out of our quarters. Instead, I whispered a quick feeble prayer asking the Lord for protection over our sleep. Soon thereafter I was deep into slumber.

The next morning, I woke up with a feeling of disturbance clouding my inner space. I quickly remembered the troubling dream that had polluted my rest. I was slightly put off with the Lord and protested to Him that I had requested protection. Why did He allow the attack on my sleep?

My battle training continued. Holy Spirit gently answered my question by giving me a picture of the typical classroom bully. He explained, “When the bully saunters into the room, he lets everyone present know who’s boss. His very demeanor is threatening and territorial. He gives off the air of being large and in charge. Those in his disfavor quickly hasten to slink out of his path. I want you to see yourself that way with the enemy. You are the bully, and he is the one who needs to tremble. Greater is He that is in you! You saunter into every new space and let any demon hanging around know Who just came into the room with you. You assume, everywhere you go, that you represent My Kingdom. You are in charge, and they better quickly scramble to get out of the way.”

No cowering needing. No hiding under the covers and whimpering for God’s protection. It’s when you come to know Whose you are, that you discover who you are. YOU have all the power in the universe living inside of you. His name is Jesus, and He already annihilated the enemy, triumphing over him at the cross. Even when you are exhausted, walk into any room understanding that the hosts of darkness have to flee before you at His word spoken through your mouth.

Mighty warrior, YOU are the champion. YOU are the victor. So show up for the battle. “Fight the good fight of faith” (1 Tim. 6:12). When the wait gets excruciating, when the battle presses in thickly against you, fight! Fight! FIGHT!!! When despair tries to sit on you and keep you from praying, FIGHT! Even if you have to crawl on your hands and knees to the on switch for your praise music, get there and crank it up to top volume! Make yourself sing! FIGHT! Let the legionnaire rise inside of you! FIGHT!

As you wait for the fulfillment of God’s promises to you, there is purpose in the battle that you are fighting. According to Psalm 18, God is enlightening your darkness. He is arming you with strength. He is making your way perfect. He is teaching you to access high places in spirit. He is giving you the necks of your enemies. He is stooping down to make you great! 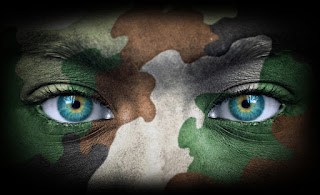 As you show up on the battle field again and again, something amazing is happening in you. You are becoming the devil’s worst nightmare. Hey soldier, take a breather and look! Check out those solid GI muscles taking shape under your uniform! You are filling out in spirit! Take in the glorious Holy Spirit fire that is roaring through you and burning up His enemies in your path! The evil one sees it too, and he is filled with horror. He is fully aware that those who show up for God’s warfare training become unstoppable, devastating weapons of mass destruction to his already defeated kingdom. You just say the word, and he is fleeing in seven directions before you.

Again, warrior, listen closely with your spirit. Show up. Fight ferociously. Win. Repeat. All of heaven is watching, and this is what they see: an invincible, hell-crushing conqueror is being born!

How is your combat training coming along?

Posted by Jenn Arimborgo at 9:30 PM